Anything can be part of a complete breakfast if you believe in yourself.

A long, long time ago I worked a retail job with a man named Mike “Gunface” McKenzie, guitarist and vocalist for the metal band The Red Chord. This is a recipe for waffles. Stay with me, here.

Mike did a lot of stomping and roaring. Generally, I mean. It wasn’t always in response to anything, even; just the way he moved through the world. He was a friendly, positive, boundlessly enthusiastic dude.

More often than not, the arrival of his lunch would be heralded by a booming, guttural, extremely metal “RRRGH I LOVE FOOD.” You could hear it throughout the entire lousy store, followed by a series of similarly audible war-stomps toward the breakroom. This wasn’t, like, with regards to any specific food. Mike was just pumped as hell that some food was around, and he could eat it. If the food was itself very good, oh man, what a time to be alive. But the baseline experience was:

This is a life lesson that I have taken to heart.

I almost named this site “Haute Garbage” instead of the much less catchy “Wilto Makes Food.” What stopped me was that “garbage” part; like certain ingredients would imply some kind of negative value, and that isn’t how I do. Food is great. A delicate, shatteringly crisp mille-feuille is great. A hot bowl of Spaghetti-Os is great. Maybe you’re into kale, and like, alright, yeah, nice. A fistful of Doritos straight off the kitchen counter? Nice. Far as I’m concerned, if you’re gonna try to go around assigning some kind of righteous value to food, you’ll only do worse than “we should make sure everyone has some.” Maybe start and end there.

I found out that Mike McKenzie did some sound work for Sesame Street, a few years back—specifically, for a short animation about potty training. I think he narrated it, too. All of this absolutely makes sense to me. When asked during an interview whether he’d drawn inspiration from watching Sesame Street as a kid, well, his answer might be part of the origins of the valuable lesson he taught me:

I still have the song “Everybody Eats” in my head from time to time.

Were you gonna talk about the waffles, or..?

Yeah—they’re pretty good, I think. I’ve been working on this recipe for a couple weeks now; it includes four (4) kinds of sugar and zero (0) moral value. I didn’t “sneak” yogurt into ’em, as though that would make them, like, more morally just waffles. They aren’t some scandalous indulgence. Their redeeming quality is that they’re waffles. You can have some waffles if you want some, and that is great. Roar and stomp around your kitchen and enjoy the hell out of these. 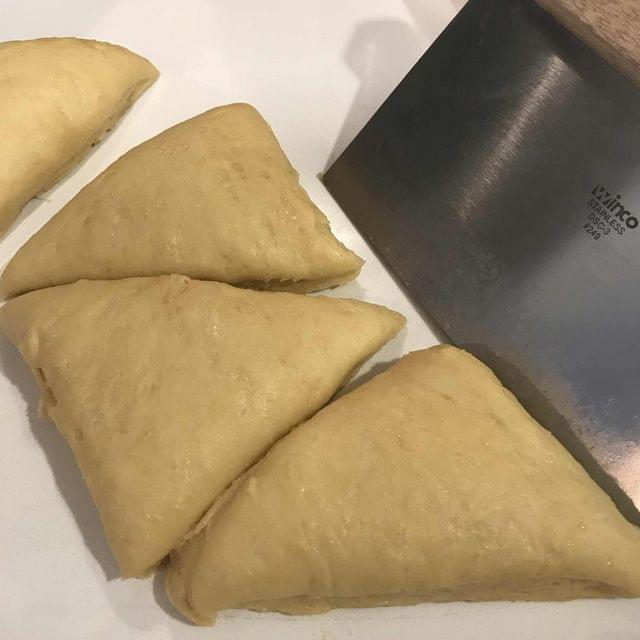 This is a yeast-raised dough, so it behaves a little more like bread dough than the much wetter steam/baking powder/baking soda leavening of more American waffle batters. I find it easier to work with, personally, but bread doughs are right in my baking comfort zone. Even if they aren’t in yours, give this recipe a shot—a dough this rich isn’t gonna be fussy at all.

Now, while it is typical of American waffles, buttermilk isn’t typical of fancier, dessert-ier waffles like these. Here, it serves two purposes: I’d first tried it out in an effort to make the browning a little more manageable, which it seems to, if only a little. Mostly though, I found that the tang of the buttermilk keeps these from tipping too far into “dessert” territory. I mean, if “make it sweeter” was the whole endgame, we could make cookies instead. The buttermilk gives them a little more complexity; it serves as a better backdrop for the crunches of pearl sugar throughout. You can sub it out for milk if you’re not into it, but you might need to dial your waffle maker down a little lower.

Speaking of the pearl sugar, that stuff is non-negotiable. I tried chucking in some granulated sugar at the last-minute, or subbing in sparkling sugar, and both times the heat broke it down too quickly. The dough got sweeter, but you lost the contrast and—yeah, I’ll say it—the mouthfeel of those crispy little candy bits. Some of them do break down, especially near the surface. It feels like we’re adding a lot of ’em during that final step, but it ends up working out.

Don’t skip the pearl sugar—it’ll make or break this one, trust me. You can sub out the buttermilk for whole milk, but you might need to lower the heat on your waffle maker.